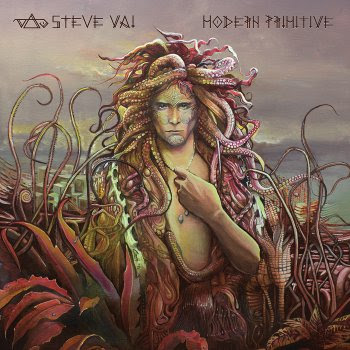 In 2001 (or was it 2002?), Steve Vai released "The Secret Jewel Box", a box that was to contain 10 discs. The latest addition to this box is "Modern Primitive", the album that got released as a package with the 25th anniversary edition of "Passion and Warfare" last year.

The CD has got the letter "H" printed on the spine.
Eventually, all the albums together will spell out "LIGHT w/o HEAT".

"Modern Primitive" is a superb album.
It's the missing link between "Flex-Able" and "Passion and Warfare" and those remain two of my all-time favourite albums.
In the liner notes, Steve says: '... the material on Modern Primitive was mostly written or recorded when I was between the ages of 23-26. And now, a 55-year-old Steve Vai is completing this material, hence the name Modern Primitive.'
Featuring Mike Keneally and Tommy Mars !
One track co-written by Tommy Mars and another one by Bob Harris !