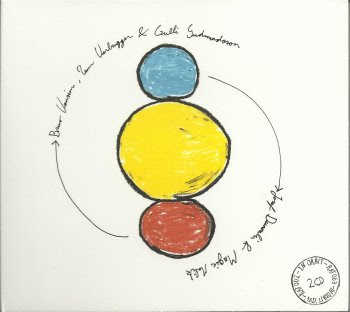 The Bruno Vansina (sax), Teun Verbruggen (drums) and Gillis Gudmundsson (bass) Trio released "In Orbit" in 2005.
This 2CD set was the second release on the Rat Records label. It presents studio recordings from Amsterdam on disc one and a live registration from Brussels on disc two.

Icing on the cake are special guests Magic Malik (on flute and vocals) and Jozef Dumoulin (on piano) who took part in the Brussels concert.
"The second CD is live, with pianist Jozef Dumoulin and flutist Magic Malik sitting in. Neither knew the music and hearing them learn it in real time is fascinating, as they don't hesitate to push the trio around a bit."

It's music, Jim, but not as we know it... Fascinating.