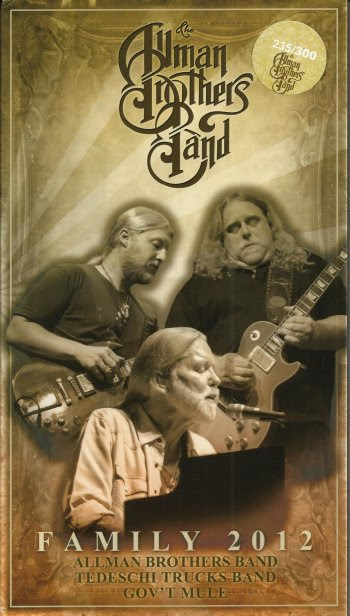 Two years ago, Wonderland Records released this 4 DVD set in a limited edition of 300 (!!) copies.
"Family 2012" is attributed to the Allman Brothers Band, but it actually is a collection of concerts by the Allman Brothers and by their spin off bands, Tedeschi Trucks Band and Gov't Mule.

I remember Michael Krampe telling me to check out The Allman Brothers Band and their fabulous guitar players some ten or so years ago.
"Family 2012" sure proves him right.

Disc number four includes Gov't Mule's 2012/06/02 Mountain Jam concert where the band played Frank Zappa's 'Trouble Every Day'.
So besides being another musical treat, this 4 DVD box also gets its place in The Others Of Invention (artists performing the music of Frank Zappa)