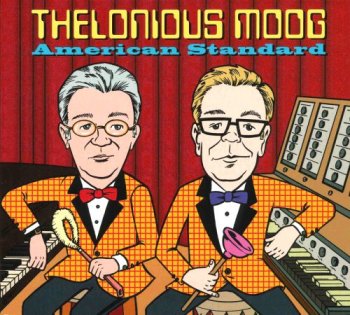 For their first album "Yes We Didn't", Thelonious Moog (Joe 'Guido' Welsh and Steve Million) recorded a set of Thelonious Monk tunes.
"American Standards" is the duo's second album. They kept the name but changed the concept. As the title suggests, the listener is treated to moog-ed versions of a number of familiar sounding tunes.

The album opens with 'Powerhouse', the Raymond Scott classic, and ends with Earle Hagen's 'Harlem Nocturne'. In-between are superb and hilarious versions of great tunes, including Frank Zappa's 'Duodenum' (and Focus' 'Hocus Pocus').
The album got released in 2007 (how come I only heard about it now ?!?). Nice artwork / package by Wayno and David Greenberger.