THE NORWEGIAN WIND ENSEMBLE - THE BRASS FROM UTOPIA 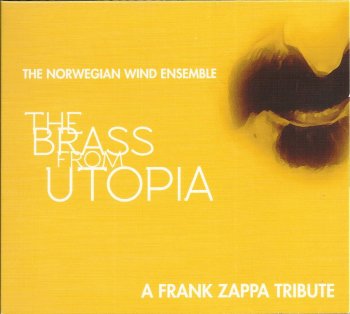 February 2012, The Norwegian Wind Ensemle performed the music of Frank Zappa at the Yellow Snow Festival in Larvik, Norway. It was the first time that I had heard of this ensemble.
As audience recordings turned up, it was clear that this was a top band. These guys (and girls) knew how to play.

So when word got out that the Norwegian Wind Ensemble was to release an album, this was considered by many as excellent news. And, the band got the ZFT stamp of approval. The new album was to be part of the Zappa Plays Zappa merchandise stand during the November / December European leg of the 2013 tour.

Unfortunately, the ZpZ tour-deal did not happen. Even worse, the Norwegian Wind Ensemble's website was not aimed at international visitors and customers. Ordering from abroad was not an option.

A number of e-mails later, and thanks to the interferance of Thomas, this got resolved a couple of weeks ago. As a result, I have been playing one superb album at least twice every day for the last week.
This is truly superb.

"The Brass From Utopia".
An avalanche of sound.
Dazzling fireworks.
Controlled power.
It's all there.

It might be February 2014 now, but this is without questioning the best album that got released in 2013.

Fluent at one moment, short and accentuated the next.
I love it.
Stian Aareskjold did all the arrangements and he did a fantastic job.
Thank you.

To give you an idea, here's a little live fragment, recorded by Clint :