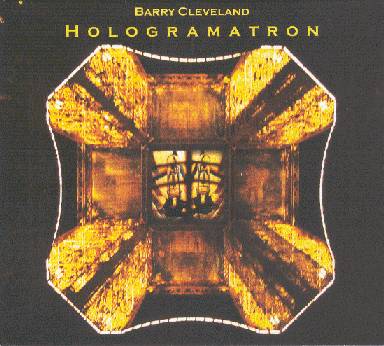 Barry Cleveland is best known for his experimental guitar playing. He has recorded playing a viola/guitar hybrid (that one can play with a bow!), as well as with a Moog-guitar.

This does, however, not overshadow the fact that he is an fine musician and composer. On "Hologramatron", his 5th release, he combines rock, folk and psychedelic elements. The result is pretty impressive, and not in the least because of the bunch of musicians that Cleveland has gathered around him. Especially Michael Manring (bass) and Amy X Neuburg (vocals) take the album to the another level.

I like this. And Barry Cleveland isn't afraid of spreading a social or political message either.
Just listen to the opening sentence of the first track: "Jesus has returned. As a militant conservative". It immediately sets the tone. And there's a couple of nice coverversions on the album as well, including The Tornadoes' 'Tellstar'...

As a bonus, the disc offers three remixes, totaling it at 65 minutes;

"Hologramatron" is a fine progressive rock album. Recommended listening.
I enjoyed every minute of it.