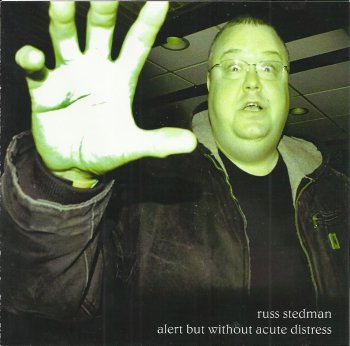 Guitar player and composer Russ Stedman released "Alert But Without Acute Distress" already a couple of years ago, but I only discovered it recently.

My search for artists that recorded or that are influenced by the music of Frank Zappa regularly generates some fine discoveries and Russ Stedman is a perfect example.
I first heard of Russ Stedman when I found out about the DIY scene that also included people like Eugene Chadbourne, Dino Dimuro and Rudy Schwartz. Home tapers. Artists that recorded and distributed their music by themselves. On cassettes. And later on CDR's.
I also learned that Russ had released the "Where's My Waitress" compilation / tribute to the music of Frank Zappa. Russ re-released the cassette as a CDR a couple of years after that.

Russ Stedman's music is unpredictable and he throws in a nice guitar solo from time to time. Two things that I appreciate in music.
If you're not familiar with Russ' music, "Alert But Without Acute Distress" is a nice place to start.
Original, Zappa-inspired compositions, a couple of nice coverversions, and a superb version of FZ's 'Penis Dimenstion'.

You can find it here :
http://russstedman.bandcamp.com/album/alert-but-without-acute-distress

Email ThisBlogThis!Share to TwitterShare to FacebookShare to Pinterest
Labels: others of invention, russ stedman, zappa