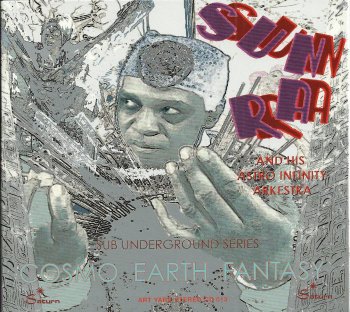 The late Sun Ra used to have his own record label. It was called Saturn and it was used to release records that the band took with them to concerts. So every time when the Arkestra left for a series of concerts, they took the boxes of the Saturn records with them. When they ran out of records, they printed new runs, often meaning that they would use new recordings, sometimes mixing them with material that already had been released. One print-run usually was about 300 copies. The result is an immense and very complex discography.

During the early seventies, two different LP's on Sun Ra's Saturn label were entitled "Sub Underground". To make things even more complicated, a hybrid version of these two LP's exist as well: using one side from the first and the other side from the second album.
All this to say that the original albums are not easy to find.
It is Art Yard's mission to reissue a series of Saturn albums. Their latest release "Underground Series - Cosmo Earth Fantasy" combines the recordings of both the original albums.

"A classic Saturn experimental studio/rehearsal release, starting with 8 delirious minutes of Kora and Piano frame - almost certainly the Strange Strings instruments, whatever they were... and then Ra's signature clavinet of the period and an unidentifiable double- reed instrument, probably Marshall Allen... enter the xylophone.. I sense you're getting the picture; all in all 21 great later-1960s minutes. Followed by a lyrical standard with Ra playing acoustic piano and John Gilmore saying what has to be said: a live recording, as is the next; congas, bongos, Ra on Rocksichord and singing in the Ra-African style. Some fine straight ahead jazz follows - with serious electric guitar and great tenor playing. And so it goes on, winding up with full-on Space is the Place Angel rant from Ra - not the best sound, but heartfelt. A fine, eclectic collection with enough gems."