AS THE ZAPPADAN CONTINUES...

My Zappanale CD series got two titles added today.
I had noticed that there were two titles missing, so I ordered these from the Arf Society last week.

If I'm not mistaken, this was the third promotional sampler that got released by the Arfs. Early birds got this disc when ordering their ticket for Zappanale 16.
"Zappanale #15" takes a look back with fine performances by The Foolz, Arf, Frogg Café, The Wrong Object, The Grand Mothers and many more. 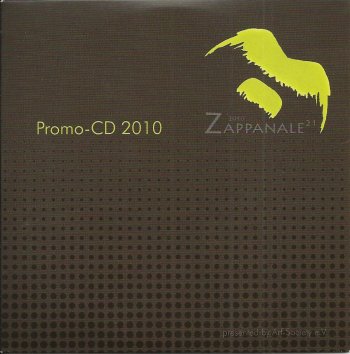 This second sampler got released in 2009. It also is a promotional sampler. This time, the disc presented recordings from bands that still had to play at Zappanale. Excellent tracks by Sebkah-Chott, Beardfish, The Central Scrutinzer Band, Caballero Reynaldo, Zappatika, LeBocal, and many more.

Both albums have been added to the respective discographies over the United Mutations Archives.
(While I listened to them, of course)