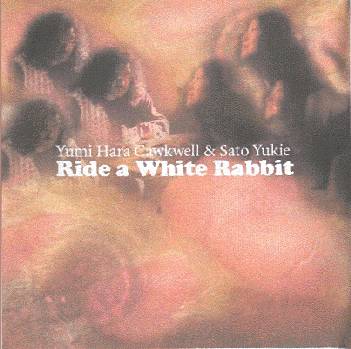 I received this nice a little while ago. Even before the earthquake / tsunami / nuclear disaster in Japan.

On "Ride A White Rabbit" Yumi Hara Cawkwell (on keyboard and vocals) teams up with Sato Yukie (on guitar). The result is an album with seven psycheledic, improvised tracks, with the last track, 'Clinging Bogy' clocking in at almost 19 minutes.

The album title refers to T-Rex' "Ride A White Swan" and Jefferson Airplane's "White Rabbit". Add to this that the Super-Hakuto express train plays an important role in today's Japan (Hakuto = white rabbit) and that 2011 is the year of the rabbit, and you will understand that this is not a random album title.

Listening to the music on this album, is like entering another world. Improvised, avant-garde music gets combined with Yumi Hara's psychedelic sounding vocals. Intriguing to say the least.