TODD GRUBBS - RETURN OF THE WORM 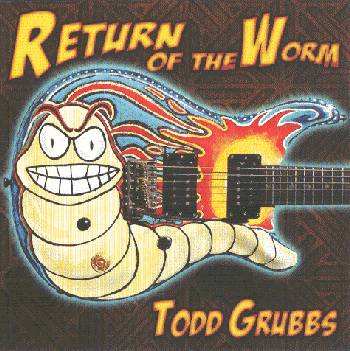 Guitar virtuoso Todd Grubbs has a new album out! It's called "Return Of The Worm" and it rocks.

You might have heard of Todd Grubbs as he has contributed to the two Zappa tribute albums that Andrew Greenaway put together for Cordelia Records. For "20 Extraordinary Renditions", Todd Grubbs (and Bo Smith) contributed his version of Zappa's 'The Idiot Bastard Son', and for "21 Burnt Weeny Sandwiches" the Todd Brubbs Group (and Ant-Bee) recorded 'Themes From Burnt Weeny Sandwich'.

In the same vain, "Return Of The Worm" does not make concessions. This is a great album. It's funny, it has some great rock tunes and includes a couple of zappa-esque surprises as well. Todd adds:

“My new CD is a little different than my previous few releases,” explains Todd, “although it really may be more of a progression in being truer to myself. I really have gotten to the point where I am creating my music without any consideration of what others might think, or what I think others might think. Don't get me wrong, this is still a crazy guitar CD with tons of varied guitars flying around, but I had a lot of fun with the addition of 'field recordings'; a group of interesting recordings that I have made over the years and then I have built compositions around them or interjected them into preexisting songs. That was definitely the best time I have ever had making a CD and I am excited about continuing in this direction.”

Icing on the cake are contributions by Mike Keneally and Jerry Outlaw!! Love it.