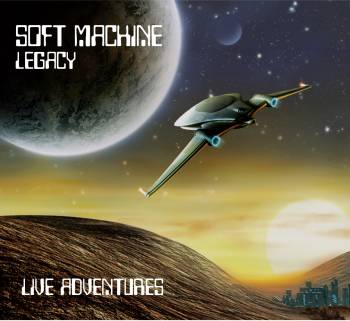 Seeing the Soft Machine Legacy live at Zappanale in 2006 was a revelation for me. I was familiar with the band's first releases (up to the "Seven" album), but I didn't really know what they had been doing lately.
The Zappanale (August 2006) line-up consisted of John Etheridge (guitar), John Marshall (drums), Theo Travis (sax) and Hugh Hopper (bass), and they made an everlasting impression.

"Live Adventures" captures the band in the same spirit. This new MoonJune album presents live recordings from October 2009. The late Hugh Hopper has been replaced by Roy Babbington, and the band still mixes older, familiar material with new compositions (at least to my ears!).

The band has been around since the late sixties, and some of these compositions might be over thirty years old, but "Live Adventures" sounds as fresh and contemporary as it can get.
Timeless might be a better word for it.

This prog rock / fusion at the highest level.
If any other band would display such a high quality in musicianship and composition, they'd be the discovery of the year.

Here's the Carl Jenkins penned 'The Nodder', recorded in Rome. Taken from the same tour: