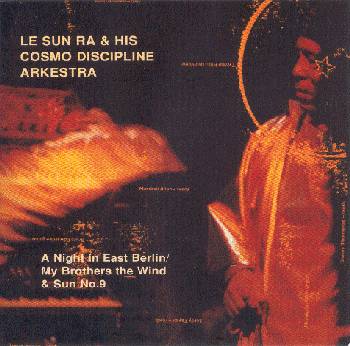 June 28, 1986, Le Sun Ra & His Cosmo Discipline Arkestra landed in East Berlin.
Straight from outer space, Sun Ra and his Band showed the world what music sounds like on the planet Saturn.

Originally released on his own label (on cassette only), and on vinyl (on Leo records) in 1987, this remarkable concert got re-released on CD in 1995. Also on Leo Records.
The 1995 CD-release does have a bonus track: 'My Brother The Wind & Sun No.9'. Previously released on an obscure Saturn release, this 20-minute piece has been labeled as originating from a 1988/01/30 Knitting Factory concert.
Data & picture have been added to the United Mutations Archives.

Here's what the start of the Berlin gig looked like: the band entered the stage and started with some fast jazz lines, making room for wild saxophone improvisations...