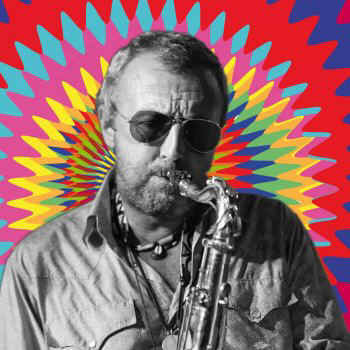 Daniele Sepe has been already been mentioned in the United Mutations blog. In 2006 Daniele released "Suorarne 1 Per Educarne 100" with his Rote Jazz Fraktion ensemble, an album that included a fine version of Frank Zappa's 'Peaches En Regalia'.

'Fables of Faubus' (Mingus) is a fine opener. Do I hear a singing saw in there ?!? Fun.
Sonny Rollins' 'Blue Room' follows. Great sax playing. This would fit perfectly for a Peanuts animation movie. Next to Vince Guaraldi. Good grief !
'Mercy, Mercy, Mercy', written by the late Joe Zawinul, gets a funky, laid-back interpretation. One of my favourite tracks on the album.
Track number four is the Bill Evans penned 'Loose Bloose'. A fabulous track and an excellent interpretation.
Next up are two classic Zappa tunes, 'Sofa' and 'King Kong'. 'Sofa' puts guitarist Franco Giacoia in the spotlight who plays an amazing solo. 'King Kong' gets a tubular bell treatment. Love it. 'King Kong' is the perfect composition / support to showcase the band and that exactly what you get. What a tune... What a band... Superb !!
'Mademoiselle Mabry' is next. Originally recorded by Miles Davis in 1968 and released on his "Filles de Kilimanjoro" album. I definitely need to listen to the original album again soon... The track kicks off with a little Hendrix vamp and swiftly morphs into Miss Mabry. Great. Is that a wah-wah used with the sax?
The band continues with the playful 'Big Nick' (Coltrane). Again, Daniele shows that he knows how to pick a superb collection of compositions. 'Big Nick' is no exception. A beautiful tune, directed by Davide Costagliola's electric bass and Tommy De Paola's piano.
It is followed by Gato Barbieri's 'Antonico'. Smooth. Latin. I'm not familiar with Gato Barbieri's work, but 'Antonico', as performed by Daniele Sepe and his band, is a nice invitation.
Track number ten is 'Palladium'. Written by Joe Zawinul and made famous by Weather Report. Daniele and his compagni perfectly succeed in bringing the typical Weather Report sound back to life.
The album continues with 'So Much Trouble In The World', the Bob Marley reggae classic, with Daniele's saxophone playing the melody line. A fine arrangement with a lot of attention for the detail. Nice. Very nice.
The second last track 'Out On The Tiles' is a powerful and energetic almost-rock cover of the Led Zeppelin song, while the last track, 'Round Midnight' takes you back to the jazz corner. Italian crooner / storyteller included.

In all, this is a great album. You should definitely check it out.
I was told that there also exists a 2 CD-version of this album as a part of the project that funded this release. The second disc is said to include demo and alternate versions. Unfortunately, I wasn't able to locate a copy. If anyone can help me out...