THE RESIDENTS PRESENT CHARLES BOBUCK - LIFE IS MY ONLY SUNSHINE 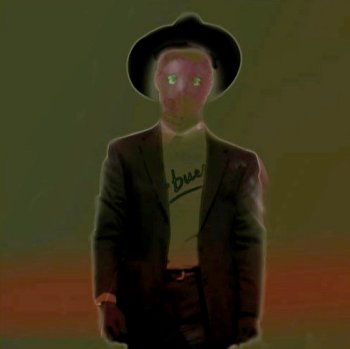 Last week I saw The Residents opening the European leg of their World Of The Weird tour in Leuven (B).
Let me try to describe the situation. I had been looking forward to this gig for quite some time. Driving to Leuven is never fun. Certainly not on a weekday.
Anyway, we arrived in time, located Ive, saw (and said 'hi' to) a couple of familiar faces (Andreas, Pierre & Kim), and we had seats. A fine start.
While waiting, we were treated to the "walk-in music": new pieces of music that were written by Charles Bobuck. Instrumental stuff. Easily recognizable and a perfect teaser for the show that was to come.
This 'walk-in music' has now been made available on CD: 5 pieces of about 10 minutes each.
Nice. Very nice.
The album is availabe through The Residents' website (go to the ebay outlet shop!).

The concert itself was okay. I can't really say that it was good. Somewhere during the concert the stage lights started moving and shining into the audience with a blinding effect. I had to shut my eyes from time to time to avoid a headache... Annoying. Very annoying. It completely ruined the experience.
In the meantime, I got hold of an audio recording of the concert. I guess I'll have to give that a listen. This time without the troubling lights (and the cheap plastic inflatable dolls ?!?).
And if that doesn't work, I'll give "Demons Dance Alone" another spin.