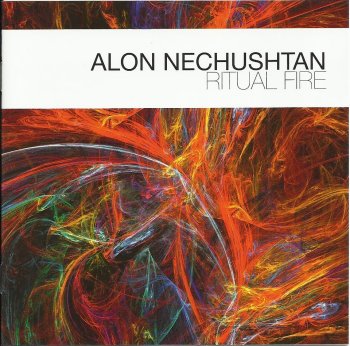 Two years ago, Alon Nechustran surprised us with "Words Beyond", a beautiful modern jazz album.
And now there's "Ritual Fire", an action suite in 10 parts, as it says on the album.

The Between The Lines record label explains:
"Jackson Pollock made "Action Painting" well known a while back, and he became one of the most important painters of the 20th century. This art form considers improvisation to be a pivotal element in painting. Color is often not applied with a brush, but drop by drop, for example, sometimes applied to the canvas directly from the can. Simple materials and techniques result in amazing results. In spite of this, it is not at all dilettantism, but instead is done based on comprehensive knowledge of all set structures and techniques. But they are just not satisfied with set structures. "Action Suite" by the pianist Alon Nechushtan pursues similar considerations. Based on virtuoso mastery of musical instrumentation and with a clear idea of what music pieces created in free improvisation should express, a number of precious pieces are created - and these grow together into an overall work of art. Free improvisation in this sense is the opposite of lack of prerequisites. To the contrary: It only works if each single member of the band contributes all of his expertise, experience and skills into a mutual work networked internally. That is what accounts for the extraordinary fascination of "Ritual Fire": Inner concordance of the musicians that has become rare that makes the free improvisation seem to listeners as if it were composed."

In the liner notes, Kurt Gottschalk quotes Alon Nechushtan saying "Though each track was mostly freely improvised with very little preparation, there was a definite, preconception for the overall organization of the session and controlling the order of these building blocks I was using to shape and form the full suite as it appears on the CD".

The result, "Ritual Fire", is very impressive. All four musicians sound as if they have been playing togher for years.
Alon Nechushtan on piano, Ken Filiano on bass, Bob Meyer on drums, and (the eighty years old) Harold Rubin on clarinet.
Every fan of contemporary, modern, improvised jazz should hear this.

Here's a live recording of a concert that featured Alon Nechustan and Harold Rubin.
Tel Aviv, August 2011.
It will give you an idea of the beautiful interaction between these musicians.

"Ritual Fire" is released on the German Between The Lines record label.