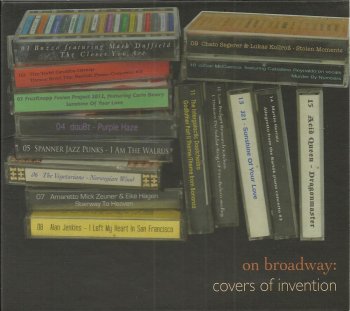 During his 1988 "Broadway The Hard Way" tour, the late Frank Zappa performed and recorded quite a number of compositions by other artists. Remember the Beatles-medley, Ravel's 'Bolero', not forgetting 'Stairway To Heaven' or 'Hey Joe'.
Andrew Greenaway celebrates the 25th anniversary of this 1988 tour by releasing an extraordinary sampler.
"On Broadway" presents 15 artists that perform a song that has been covered by FZ in 1988.
Among these artists, we find a lot of musicians that are quite familiar with the Zappa Universe: J21, Doubt, Caballero Reynaldo, Chato Segerer, Alan Jenkins, The Low Budget Research Kitchen, The Vegetarians, and many more.

An excellent idea that lead to a fine album. Some of the interpretations are a bit cheesy, but there's some superb stuff on there as well.

I like it.
Realised by Alan Jenkins, and released on his Cordelia Records label.
www.cordeliarecords.co.uk