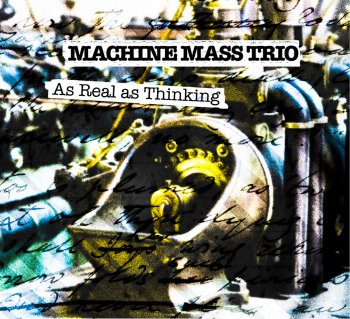 The Machine Mass Trio has Tony Bianco on drums and percussion, Michel Delville on guitar, synth guitar and electronics, and Jordi Grognard on saxophone, clarinet, flute and more.

I'm quite familiar with Michel Delville's output and I was quite impressed by douBt, the previous collaboration by Tony Bianco an Michel Delville, but that hadn't prepared me for "As Real As Thinking".
On this album, The Machine Mass Trio mixes jazz-rock, experimental rock and jazz into a feast for the mind.

There's only three people and eight compositions on this album, but there's so much going on.
I really like Tony Bianco's drumming. He's got this great jazz groove that not only gives a lot of room to the other musicians, but that keeps it all together as well.
Michel Delville's guitar playing is exceptional. I knew that Michel could toy around with synth chords and soundscapes and that he could produce beautiful clouds of notes, but on "As Real As Thinking" he really pushes his limits. The guitar solos in 'Cuckoo' and in 'Let Go' are fantastic.
And then there's Jordi Grognard's fluent jazz lines that add the experimental jazz flavour to the whole.
I love it !!

With "As Real As Thinking" the Machine Mass Trio gives you a varied mix of experimental rock and jazz: angular melodies on groovy rhythms, impressive improvisations and great interactions.

Highly recommended !!
& out on Moonjune Records.

Check out the samples at the band's MySpace site !!