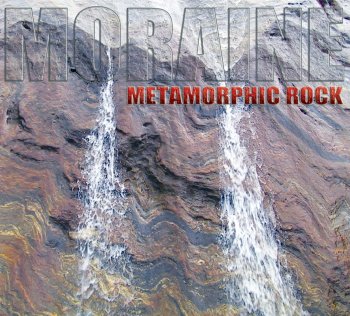 When the Moonjune Records released Moraine's "Manifest Density" in 2009, I was quite impressed.
We're 2011 now, and Moraine is back with "Metamorphic Rock", another excellent album.

Moraine plays fusionlike, instrumental progressive rock with a dash of world and eastern flavours.
Compared to their first release, the colour of their sound has changed a little bit, and the line-up did slightly change as well. Dennis Rea on guitar, Kevin Millard on bass & NS/stick, Alicia DeJoie on violin, James DeJoie on sax and flute and Stephen Cavit on drums and percussion.

The album was recorded live in concert at the 2010 edition of NEARfest. The sound is great and the performance is excellent. It's hard to believe that this was recorded live. The band plays very tight, very powerfull.

NEARfest, is one of the biggest festivals for progressive rock music fans. I'm pretty sure that Moraine made quite an impression. 2012 will see the last edition of NEARfest, byt the way, which is a shame as many great bands have performed there.

Moraine has a very unique and recognisable sound and "Metamorphic Rock" gives a perfect description of what you will get. Just listen to the below clip, and you'll immeditately hear what I mean.
Recommended !

Here's 'Save The Yuppie Breeding Grounds' from the very same NEARfest concert. The track could be already be found on "Manifest Density" and is now available on "Metamorphic Rock" in a live version.