FREAK OUT IN TURNHOUT REVISITED 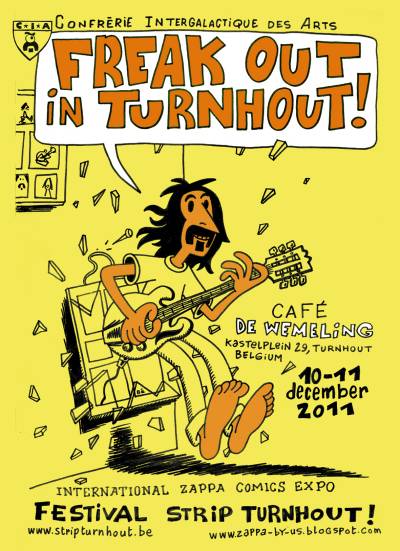 “Strip Turnhout” is the name of bi-annual comic book festival that is held in Turnhout, a small city in the north of Belgium. During the two days of the festival, Strip Turnhout welcomes approximately 15.000 visitors.

During the festival several expos are held in and around De Warande, Turnhout’s cultural centre.
And I am happy to tell you that the next edition of Strip Turnhout will feature “Freak Out In Turnhout”, an expo by the C.I.A., a french group of comic book artists.
The C.I.A. (Confrérie Intergalactique des Arts) will present comics by artists from all around the globe that have been inspired by (the music of) the late Frank Zappa.
And to make it even more interesting, composer & trumpet player Bart Maris (X-Legged Sally, Think Of One, Flat Earth Society) has agreed to perform at the expo on Saturday afternoon (at 16.00 h).

Wowie Zowie. This will be great.

See you there.
Geplaatst door UniMuta op 8:52 AM