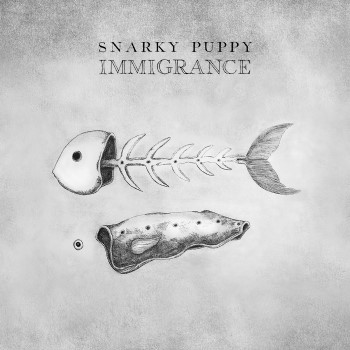 I'm not really counting, but if you include the "17" 4LP live box, last year's "Shanktank" 10", and the marvellous "2015 World Tour" 32CD box set, this just might be release number 15 for Snarky Puppy!! Bring out the candle!!
Released about two weeks ago.
Magnificent..

"Immigrance", the new Snarky Puppy studio album, is all about movement. “The idea here is that everything is fluid, that everything is always moving and that we’re all in a constant state of immigration,” explains Michael League.

Here's a sample, also displaying the wonderful artwork of Zeycan Alkis, who did the artwork for the album cover.