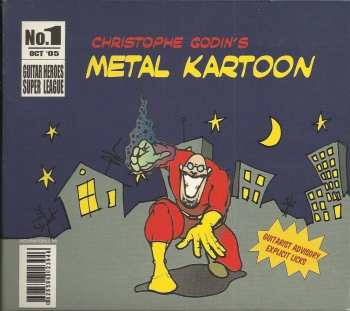 There's lots of news, and I'm running a bit behind schedule, but I really wanted to talk a bit about Christophe Godin's "Metal Kartoon" album.
You might, or should, know that the new Mörglbl album is out / will be out very soon. It's called "Brutal Romance". To get ready for this new release, I started the day with "Metal Kartoon".

Released in 2005, "Metal Kartoon" was Christophe Godin's first solo album. As the title suggests, "Metal Kartoon" tells stories. Pretty funny stories. The music is a mix of metal, fusion and prog rock, but there's also quite a number of songs that could be classified as pop as well.

The band sounds very good, and Christophe's guitar playing is as impressive as ever.
I love the humour (even my sons caught the Simpsons-theme in the middle of 'Au Pays De Ghandi') and the guitar solos give me goosebumps. This is great !!

Food for guitar freaks and for melomaniacs with a sense of humour.

Here's the Metal Kartoon band in concert, with special guest Mattias IA Eklundh (who also guests on the album):