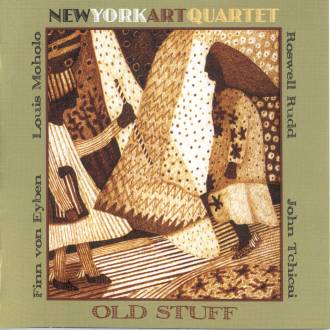 The short-lived New York Art Quartet made two albums during the nearly two years that it existed: one in 1964, entitled "New York Art Quartet", and another one in 1965, called "Mohawk". These albums featured John Tchicai on sax, Roswell Rudd on trombone, Milford Graves on drums and Lewis Worell or Reggie Workman on bass.

October 1965, John Tchicai went back home to Denmark and arranged a couple of concerts for the New York Art Quartet. Unfortunately, only Roswell Rudd was the only one that was able to join him and so a new version of the band took the stage in Copenhagen.
After these gigs, Tchicai and Rudd went back to New York City, where they played some more gigs as the New York Art Quartet, but early 1966, as Roswell Budd joined Archie Shepp's band, the band seized to exist.

In 1999, the NYAQ did a reunion concert (or as Milford Graves said: "...a continuance of the beautiful music that this group is capable of performing..."). The band had reassembled for this reunion concert at the South Street Seaport in New York City, opening for Sonic Youth at the invitation of Thurston Moore.
As a result of this, the recorded an album for the japanese DIW label, entitled "Reunion".
Here's Thurston Moore's article "Top ten from the free jazz underground", published in Grand Royal Magazine #2
http://www.saucerlike.com/articles.php?x=display&id=2

And more recently, Cuneiform Records released recordings from the concert and radio session the band did in Denmark, October 1965, entitled "Old Stuff".
The disc presents recordings made by the NYAQ during their 1965 concerts in Copenhagen, Denmark.

This is free jazz at its best.
John Tchicai's alto sax and Roswell Budd's trombone search and find impressive lines and melodies, backed by Finn Von Eyben on bass and Louis Moholo on drums.

This is great. Adventurous music in a nice package, including excellent liner-notes by producer Jason Weiss.

A piece of history on a silver disc !