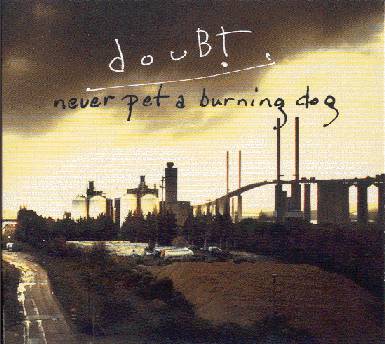 "Never Pet A Burning Dog" sounds like an old chinese saying, but it actually is a quote from the television mini series "Generation Kill". The episode was about a team that went to Iraq to help the people by ridding them of Saddam Hoessein's regime. The people of Iraq, however, had bigger problems than Saddam (poverty, unrest, corruption, ...) and considered the 'help' as an unwelcome distraction.

"Never Pet A Burning Dog" also is the title of the first douBt album. August 2009, Alex Maguire, Michel Delville and Tony Bianco teamed up in Italy and recorded some tracks at Beppe Crovella's studio. The result of which can be found on the latest MoonJune release.

Track one, 'Corale Di San Luca', opens quietly and features guest musician (and Canterbury legend) Richard Sinclair (of Hatfield & The North). Tony Bianco's drumming, however, already shows what's coming in the next track. 'Laughter' has the power trio up at full speed. An excellent start.
The album continues with 'Over Birkerot', a composition by Norwegian guitar player Terje Rypdal, in an arrangement of Michel Delville.
'Sea' is another superb track. Tony Bianco's drumming dances on the tide. Incredible interaction between Alex Maguire and Tony Bianco.
Next up is 'Passing Cloud', with Richard Sinclair on vocals. It's a nice piece and good resting point before Michel Delville takes you through his 'Cosmic Surgery', another showcase of the talents of this trio.
Track number seven, 'Aeon'. This is a more experimental composition. Beautiful soundscapes against Tony Bianco's hyperdrumming.
The album concludes with 'Beppe's Shelter', an eight minute piece that starts with a Zappa-inspired guitar solo. A superb ending.

Listen to some samples here:
http://www.myspace.com/doubt3