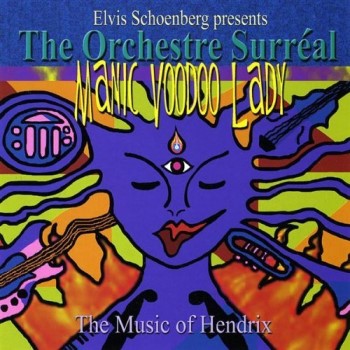 This third album by Elvis Schoenberg's Orchestra Surréal pays tribute to the music of Jimi Hendrix.
I knew E.S. from his two excellent "Air Surreal" and "It's Alive" albums, released in 1998 and 2003.
I had no idea that he had released a third album. What a nice find. (thanks for the info, Danny !)

Unpredictable and fun. One might call it Zappa-esque.
Featuring Ken Rosser (who we also know from The Grandmothers) in their line-up and special guest Scott Henderson one one track.
Love it.