DAVID MOSS & HANNES STROBL - AT THE BEACH : MUSIC FOR VOICE AND ELECTRIC BASS 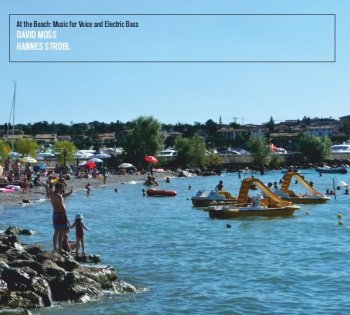 Somewhere in 1992, David Moss was part of the Markus Stauss Project. He can be heard on Stauss' "New Duos And Trios" album.

June 2000, I saw David Moss performing with the Ensemble Modern as a part of the Holland 2000 Festival. It was the "Greggery Peccary & Other Persuasions" program that toured Europe and that eventually got released on an album by the Ensemble Modern.
More recently, February 2011, David took part in another concert where he performed Zappa's music with the PMCE.

Anyway, the Polish record label Monotype Rec. just released "At The Beach : Music For Voice And Electric Bass" where David Moss teams up with Hannes Strobl.