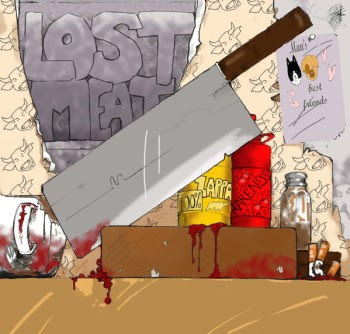 I finally added the info for "Lost Meat" to the United Mutations Archives.
An excellent opportunity to give this fine album another listen.

All compositions by Frank Zappa, but the goal was to record songs that aren't part of the official FZ discography.
Familiar names, but also some artists that I've never heard of.
It's hard to pick favorite tracks but I really like Z.E.R.O.'s version of 'Grunion Run'. It takes you back to the sixties.
Fuchsprellen's contemporary take on 'If I Could Only Be Your Love Again' sounds great as well. Ruben & The Jets rule !
And then there's The Vegetarians with 'Touch Me There', from the Shankar album.
And Gabba Zappa Hey!, and Fred Händl (hilarious !). And many more...

Another excellent compilation on the Cordelia Records label.
Tip to the hat to Andrew Greenaway and Alan Jenkins !